(Ottawa – April 19, 2017) The National Council of Canadian Muslims (NCCM) is calling on police services to do all they can to swiftly bring to justice those targeting Muslims and their institutions.

Ibrahim Hindy, a local Toronto imam has been the target of violent threats in recent days, linked to a vitriolic anti-Muslim campaign against prayers in the Peel District School Board (PDSB). Other Muslim advocates and students have also been targeted. 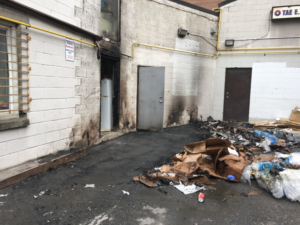 The Islam Care Centre in Ottawa has been targeted twice in the past week.

In Ottawa, two local institutions have also been the target of hate in recent days.

The Ottawa Muslim Association had several windows broken, as did the Islam Care Centre, last week. A man was charged with two charges of mischief relating to religious property, and one charge of assaulting a police officer.

And overnight on Wednesday, the Islam Care Centre was targeted again when someone left a hateful note and set fire to the building. The incident is being investigated and there are some concerns that the perpetrator may be linked to a white supremacist group.

« The fire could have destroyed the food and clothing that we collect to distribute to the homeless and to the needy, » says Omar Mahfoudhi, executive director of the Islam Care Centre. « It’s troubling that anyone would try to hurt our communities in this way, impacting not just Ottawa Muslim communities, but the most vulnerable people that we serve across the city. »

« Community members are justifiably concerned about their safety and well-being, » says Sehrish Amjad, NCCM’s Human Rights Officer. « Our police services must do everything to assure communities that these issues are being taken seriously and that everything is being done to protect individuals and institutions. Our elected officials also have a role to play in speaking consistently against hatred.  »

Hindy says that police have assured him that there will be increased patrols around his home and the mosque he leads.

« It’s up to all Canadians to stand together against all forms of hatred, » says Hindy.

The NCCM continues to call on police services to provide an annual report detailing hate crimes and hate incidents happening in their communities, as outlined in an open letter following the tragic shootings at a Quebec City mosque.

Communities currently rely on data from Statistics Canada which reports on police-reported hate crimes two years after the fact.

Municipalities, provincial legislatures, and other public institutions and community members, are also being encouraged to endorse NCCM’s Charter for Inclusive Communities. Several municipalities, including the cities of London, Kitchener-Waterloo, London, Hamilton, and Toronto, have already signed on.