NCCM is thrilled to announce our first ever Foreign Affairs Conference, in partnership with IRC and ISNA Canada. The world is changing quickly and so are our conversations around foreign policy. New voices are emerging. New challenges are looming on the horizon. What is increasingly clear, as Canada navigates greater uncertainty, is the importance of taking an inclusive, human rights-based approach in foreign policy endeavours.

From human rights activists to community leaders, Muslim voices are an integral part of any discussion surrounding foreign affairs. Through their unique lived experiences and expertise, they offer a distinct perspective when it comes to how we can build global policies that work for everyone.

Join us in Ottawa/Gatineau for this unique opportunity to reimagine foreign policy from a Muslim-led perspective and to hear from some of the brightest voices on how we can build a human-rights based foreign policy that works for everyone.

Buy your tickets today at: https://bit.ly/3CKOYIU

Stay tuned for more information leading up to the event. 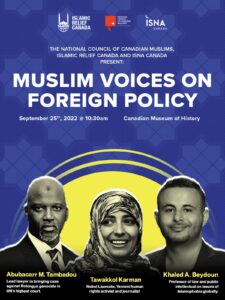 Tawakkol Karman: Nobel Peace Laureate, journalist, politician, and human rights activist. She became one of the key international faces of the movement that came to be known as the Arab Spring and was called the ‘Iron Woman’ and ‘Mother of the Revolution’ for her efforts to mobilize her country of Yemen. Karman is the first Arab woman and second Muslim to win the Nobel Peace Prize.

Khaled Beydoun: Law professor, author and public intellectual. Author of the critically acclaimed book American Islamophobia: Understanding the Roots and Rise of Fear and co-editor of Islamophobia and the Law, Professor Beydoun has been named one of the 500 Most Influential Muslims of the World.

Abubacarr Tambadou: Registrar of the International Residual Mechanism for Criminal Tribunals and former Attorney-General and Minister of Justice of the Republic of Gambia. Tambadou was included in Time’s 100 Most Influential People of 2020, in recognition of his leadership in prosecuting Myanmar for the Rohingya genocide at The Hague.