Reviewers say they heard « far too much that was distressing »

(Ottawa – April 12, 2017) A coalition of community representatives and parents joins the Vaughan African Canadian Association (VACA) and the National Council of Canadian Muslims (NCCM) in expressing deep concern with the findings of a highly anticipated report into the York District School Board (YRDSB) 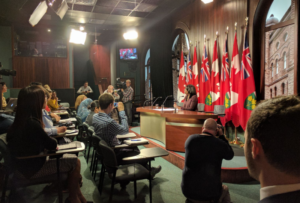 The review was ordered in January by Education Minister Mitzie Hunter. The order followed months of advocacy by families and community groups deeply troubled by issues of anti-Black racism and Islamophobia that were largely ignored and which culminated in several human rights complaints.

« There are a lot of families that are hurting, » says Gilary Massa, NCCM’s GTA Advocacy coordinator.  « Minister Hunter has clearly done the right thing in calling for this review. The report confirms the absolute failure of the board to fulfill its own policies of equity and inclusion, as well as broader issues concerning leadership and governance. The findings are deeply troubling. »

« We respectfully recommend to the Minister that if she does not receive adequate assurances and demonstrable evidence from the Board in a relatively short period of time that the YRDSB is able to act upon these recommendations, then she consider further interventions to ensure effective governance that is focussed on the achievement and well-being of all its students, » wrote the reviewers.

« This report has provided clear evidence of a broken system at the YRDSB that is harming our children, » says Shernett Martin, VACA’s Executive Director. « Those who came forward to the reviewers with their experiences showed incredible courage. It’s especially important to note that current staff described working in a culture of fear and distrust which was fostered by the board’s director, J. Philip Parapally. »

« We appreciate the hard work done by the reviewers and the Minister’s intervention, » says Naeem Siddiqi, a representative from YRDSB Kids, a coalition of concerned parents. « Given the lack of trust in Director Parappally from both staff and parents, we feel it is necessary for fresh leadership at YRDSB. His lack of judgment in ignoring equity issues has put our children at risk. YRDSB students and parents deserve better. It’s time for Mr. Parappally to go. »

The reviewers also found major flaws in the manner in which the Board of Trustees operated, saying the 12 trustees lacked « a basic understanding of their roles and responsibilities ».

« This was a moment for the Board chair, Loralea Carruthers, to take ownership of these untenable realities and provide concrete assurances that change will come, » says Garth Bobb, one of the parents who have filed a human rights complaint against the board.

« Instead, her first response was to claim that there are factual errors in the report. Her failure to assure communities that she understands and accepts the magnitude of these findings is emblematic of the consistent and historic lack of empathy at this board and the reluctance to make any meaningful change, » adds Bobb.

Representatives from the Chinese Canadian National Council (Toronto chapter), York Region Tamils, Stornoway Growth Society, the Newmarket Parent Network, Urban Alliance on Race Relations, and the Mosaic Institute, among others, have been supporting the families.

Parents applaud review on racism at York region school board, but still want director to resign